by Alex Bosworth and Bryan Vu

Today we’re excited to announce the initial release of Lightning Loop, a non-custodial service that makes it easier for people to receive funds on Lightning. As we’ve watched the network and the number of Lightning applications grow over the past year, many users have told us they were interested in a solution to help with receiving on Lightning. We’ve also seen more and more use cases, from earning satoshis on microwork sites, to selling goods with Lightning, to sending peer-to-peer payments around the world, where the ability to receive is key.

Lightning channels are like tubes of money: the more you send the more you can receive, and the other way around. Money moves around in the tube, but the total amount of funds remains constant. So, unlike other payment systems, Lightning requires “inbound capacity” in order to receive funds.

This initial release focuses on on the ability for people to receive with what we call Loop Out. Lightning Loop Out allows users to increase their receiving capacity by offloading their funds from the network while keeping channels open.


Loop Out: A Tale of Lightning Pizza

One day, a new company launches that’s selling pizza on the Lightning Network called Backgammon’s. And it turns out they’re selling lots of pizza! But over time, the capacity of Backgammon’s channels gets filled with the bitcoin they’ve received on Lightning, at which point they’re unable to accept more payments. 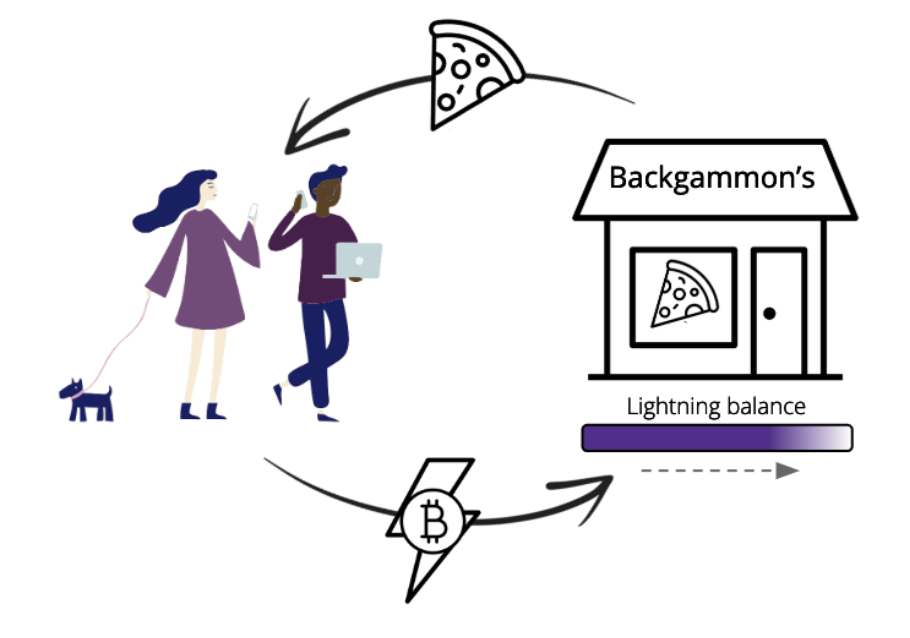 Backgammon’s can then use Loop Out to move funds out of Lightning and into a bitcoin wallet, cold storage, or fiat currency via an exchange. This emptying of the channel allows them to receive more payments and continue the cycle of selling pizza and looping out again. 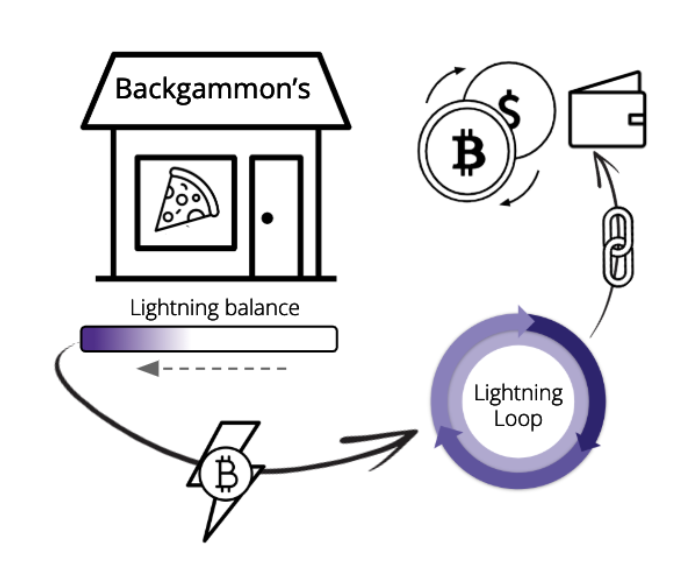 Further, when a merchant like Backgammon’s first joins the Lightning Network, they can use Loop Out to get initial receiving capacity as well. As a result, new recipients on the network no longer need to rely on others to open channels with them before they’re able to start receiving payments.

The Future of Loop

In our next release, we are planning to add Loop In, which enables users to refill their Lightning channels with on-chain bitcoin from wallets or exchanges. As a user makes a series of purchases via Lightning, her channel balance decreases. She can then use Loop In to refill her funds on Lightning from a regular on-chain bitcoin wallet or via an exchange account, and continue to add additional funds as necessary.

The vision for Lightning Loop is to allow users to securely move funds in and out of the Lightning Network using non-custodial Bitcoin contracts. With Loop, users, businesses, and routing node operators are able to keep Lightning channels open indefinitely, making the network more efficient, more stable, and cheaper to use.

This developer-focused alpha we’re releasing is intended to be used via command line interface or via the Lightning Loop gRPC API. The client-side Lightning Loop software and protocol are open source and MIT-licensed, while the server-side is fully verifiable through its use of Bitcoin contracts.

Loop Out transactions are limited to a maximum of 0.01 BTC (1M sats) for this initial release. No usage fees will be charged during the alpha, but on-chain fees will apply.

We believe Loop will contribute to the efficiency, scalability, and usability of Lightning. We encourage any Lightning developers, testers, and enthusiasts to begin trying Loop today. Any feedback from the Lightning community is always very much appreciated—please feel free to submit issues to the Lightning Loop Github repo or get in contact with us via Slack.